Putting Your Logo on M&Ms 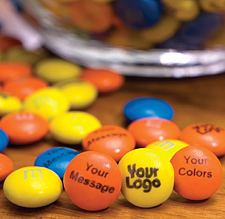 My favorite candy? Yep. You guessed it. They’re M&Ms. I just love them. Plain. With peanuts. All the cool colors. Anytime. Anywhere.

And I was even more excited when I found out that we could now sell M&Ms custom imprinted with your logo. Tons of colors to choose from so that you can pick the perfect assortment of colors for your next promotion. And custom packaging is available as well. Your next promotional campaign is sure to be a hit when you include customized M&Ms with your company’s logo.

Click here to view our M&Ms catalog with all the juicy details! (Approximately 8MB PDF but it’s worth the wait.)

Do you know the history of the candy? This is from Wikipedia: Forrest Mars, Sr. founder of the Mars Company, got the idea for the confection in the 1930s during the Spanish Civil War  when he saw soldiers eating chocolate pellets with a hard shell of tempered chocolate surrounding the inside, preventing the candies from melting. Mars received a patent for his own process on March 3, 1941. Production began in 1941 in a factory located in New Jersey. One M was for Forrest E. Mars Sr., and one for William F. R. Murrie, President of Hershey’s Chocolate. Murrie had 20 percent interest in the product. The arrangement allowed the candies to be made with Hershey chocolate which had control of the rationed chocolate. When operations were started, the hard-coated chocolates were made in five colors: red, yellow, brown, green, and violet. They were served in a cardboard tube (similar to Smarties). The practicality of the candies during World War II caused an increase in production. During the War the candies were exclusively sold to the military. In 1948, the cardboard packaging was replaced by the black cellophane packaging. In the same year Mars bought out Murrie’s 20 percent stake. (Read more here.)

Our own @snappy_kristin_eldridge began her Chamber

We can make your holiday and year-end gift giving

Sam is helping file in the office today.

We are excited for our friends at DPI, Document Pr